BALTIMORE—Six Baltimore police officers were arrested and posted bail Friday, after the chief prosecutor for the eastern U.S. city of Baltimore announced criminal charges in the death of a 25-year-old man earlier this month.

In a morning news conference near Baltimore police headquarters, Marilyn Mosby detailed how officers on April 12 repeatedly ignored the pleas for help by Freddie Gray, who died April 19 after sustaining injuries while in custody.

The driver of a police van that transported Gray faces the most serious charge, second-degree murder; other officers are accused of a variety of crimes, including involuntary manslaughter, misconduct and assault, as well as false imprisonment.

Mosby alleged a series of missteps by police, which included leaving Gray shackled without a seat belt as the vehicle made several stops throughout the western area of the city. By the time the van arrived at the police station, Gray was unresponsive and critically injured, according to the state’s attorney’s office.

Mosby also called the arrest itself “illegal,” saying a knife found on Gray was not a switchblade and was lawful for him to be carrying.

But the prosecutor also addressed the Baltimore police force, saying, “Please know that these accusations of these six officers are not an indictment on the entire force.”

All six of the police officers were freed on bail late Friday after they were arrested and arraigned.  Three of the officers are white and three are black.

“It is absolutely vital that the truth comes out on what happened to Mr. Freddie Gray,” President Barack Obama said Friday at the White House after the charges were announced.

Baltimore Mayor Stephanie Rawlings-Blake said she was “sickened and heartbroken” by the charges.

“We know that the vast majority of the men and the women in the Baltimore City Police Department serve our city with pride, with courage, with honor and with distinction, but to those of you who wish to engage in brutality, misconduct, racism and corruption, let me be clear: There is no place in the Baltimore City Police Department for you,” she said, promising “there will be justice.”

Without the medical examiner’s report being made public, the exact cause of Gray’s death remains unclear.

The police department handed over its investigation to the state attorney’s office Thursday. Mosby said two independent investigators reviewed the facts in the case for her office as well.

The decision to file charges feels like a massive victory for many Baltimore residents and the thousands of demonstrators who marched for miles daily, protesting what they saw as an act of police brutality.

“I’m happy she did it. That was murder,” said Robin Johnson, a bus driver who attended the prosecutor’s news conference on her afternoon off from work.

Like many Baltimoreans interviewed by VOA, Johnson had little hope for a trial. She didn’t think a public official like prosecutor Mosby would go up against another public agency, the police force.

“I expected her not to charge any of them,” Johnson said. “But for her to charge all six? I’m elated. I’m overjoyed.”

The night after Gray’s funeral, demonstrations turned violent in several neighborhoods where fires were set and stores were looted.  But when residents took to the streets again after Friday’s announcement, their fists pumped into the air as car horns honked in support.

Across from a pharmacy burned out in a riot, Kiona Mack was at the front of the celebration, holding a poster with Gray’s photo on it.

She recorded one of the videos of his arrest with her cellphone and has protested for police accountability since his death.

“Of course, we’re happy,” she said of the protesters. “We came out to show the world we did this together. … We fought the system back and we got justice,” Mack told VOA. “It’s just the first step. And now we just gotta go to court.”

A Baltimore police union said it was “appalled and frustrated” by the announcement of charges against the officers. An attempt by the organization to raise funds online for the officers’ legal fees was quickly shuttered by the fundraising website, citing a conflict with the site’s terms of service.

The union representing the six officers said none of them was responsible for Gray’s death.

At a Friday news conference, the attorney for the Fraternal Order of Police Lodge 3, Michael Davey, said indictments against the officers amounted to an “egergious rush to judgment.”

In a letter to the prosecutor, police officers said they were “sincerely saddened” by Gray’s sudden death.

The letter also asks that a “special independent prosecutor” be appointed to handle the case, citing conflicts of interest on the part of Mosby, who has been politically supported by the lawyer for Gray’s family, William H. Murphy. The letter also noted that Mosby’s husband is a city councilman in the district where some of the protests took place.

When she announced the charges against the police officers, Mosby dismissed any conflict on her part.

The Gray family said it was “satisfied” with the indictments handed down against the police officers.

Gray’s stepfather, Richard Shipley, told reporters that the indictments were an “important step in getting justice for Freddie.” He added a plea for peace in the city: “Without justice, there is no peace, but let us have peace in the pursuit of justice.”

Murphy, the family lawyer, also said the indictments were “a momentous step on the road to justice for Freddie.” He called the work of the state’s attorney’s office a “measured response” that took “unprecedented courage.”

In response to criticism of the charges by from the Baltimore police union, Murphy said the state’s attorney’s office took a “thorough look” at the charges. He said everyone would have to wait for the trial “to see how accurate her formulation of the charges are.” 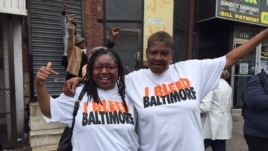 Mosby’s statements Friday were met with cheers by some of those gathered to hear her speak. Mosby acknowledged those intently watching Gray’s case and appealed to them for calm.

“To the people of Baltimore and the demonstrators across America, I heard your call for ‘no justice, no peace,’ your peace is sincerely needed as I work to deliver justice on behalf of this young man,” she said.

Has Christos ever negotiated or reconciled with Satan? [Belayneh Abate]