he Ethiopian government pardoned more than 700 prisoners in celebration of New Year’s Day on the Ethiopian calendar and the Muslim holiday Eid.

Among those released were people charged under the country’s controversial anti-terror law. Critics of the law say it is used to stifle dissent and lock up political opposition members.

Ustaz Kamil Shemsu was imprisoned in 2012 when many Muslims in Ethiopia protested what they said was government interference in their religious doctrine. He was sentenced to 22 years.

“It’s difficult to say I am happy because there are still other brothers left in prison,” he told VOA Amharic.

Prisoners were released from Kaliti, Dire Dawa, Ziway, Shewa Robit and Harer, as well as other prisons administered by the federal government in the Southern region, Tigray region and Amhara region. 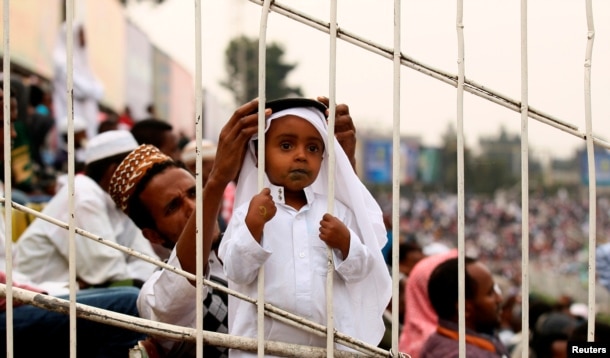 FILE – A Muslim boy attends Eid al-Fitr prayers to mark the end of the holy fasting month of Ramadan in Addis Ababa, Ethiopia, July 6, 2016.The Ethiopian government pardoned more than 700 prisoners in celebration of New Year’s Day on the Ethiopian calendar and the Muslim holiday Eid.

“The prison suddenly called us last week on Monday, along with men and one woman,” she said. “They told us that the government doesn’t want you to be imprisoned so you will be released.”

Government media announced that the president signed the pardon for Muslim groups because they expressed regret, according to Ethiopian Prosecutor-General Getachew Ambaye.

In 2012, the Muslim community in Ethiopia was introduced to new religious teachings known as Al-Ahbash. The Ethiopian government considered the teaching to be modern and began trainings in the fall of 2011. However, it encountered stiff resistance from some Muslims uncomfortable with the new teachings. Students walked out of classes in protest, and demanded a change of teachers appointed by the government.

Silent protests and sit-ins at mosques followed, and the members of a 17-person committee selected to represent students were arrested and charged with extremism.

“The claim from the committee’s side, and I think there is good enough evidence that support that, was that the Al-Ahbash movement was invited and forced upon the Muslim community, kind of like telling them what type of Islam they were supposed to be adhering to, which is a violation of the constitution,” said Terje Ostebo, director of the Center for Global Islamic Studies and an associate professor at the University of Florida.

Muslims make up of 33.9 percent of the total population of about 100 million in Ethiopia, according to the Central Intelligence Agency.

Ostebo stressed that the government has released prisoners before, and that this holiday pardon doesn’t necessarily signal a willingness to change.

“It’s kind of common in Ethiopia that New Year is the time when you show leniency and grant pardons,” he said. “I’m not sure if I could put it that strongly that they are acknowledging any mistakes.”

Yusuf Getachew, editor-in-chief of faith-based magazine Ye Muslimoch Guday, or Muslim Affairs, was one of the people released. He was arrested in July 2012.

“The government asked if we are going to accept the pardon or not, and we accepted it and that’s why we were released,” he said.

He had been sentenced to seven years.

Murithi Mutiga of the Committee to Protect Journalists said his organization was calling on Ethiopian authorities to free all prisoners of conscience.

“There is a very large number of people that have been detained within very secretive and large detention facilities that have done nothing else other than to simply do their jobs as journalists,” he said. “I think the Ethiopian authorities would do a very good thing to just let all prisoners of conscience … please let them go.”

Ethiopia says army to take over security in troubled south