Authorities in Oromia, Ethiopia’s largest state, have infuriated language experts and Oromo nationalists with their decision to re-arrange the order of the alphabet of the region’s language, Afan Oromo.

In multilingual and multiethnic Ethiopia, orthographic choices are complex linguistic and political decisions that have great socio-political consequences.

Among Ethiopia’s written languages, most write their language in either the Ge’ez or Ethiopic alphabet, known as “Fidel,” or the Roman alphabet. Afan Oromo officially adopted the Roman alphabet — in its usual order of ABCD and so on — after the current government come to power in 1991.

However, more than a quarter century later, the regional educational authorities of Oromia announced they were reshuffling the “Qubee Afan Oromo” (as the alphabet is called). The first seven letters are: 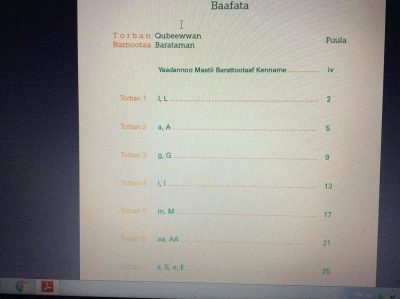 Screenshot from the news bulletin that announced the change of the alphabet on Oromia Broadcasting Services shows the first seven letters of the new order of the Alphabet shared by Girma Gutema.

Justifying the change, authorities blamed the old alphabet order as the reason why reading skills among primary school children in Oromia remain poor. They even cited a research to back up their claim.

There is, however, a problem with their argument. It was based on a misrepresentation of the findings of the research. In fact, the research, which was funded by US Agency for International Development (USAID) in 2010, revealed a broader problem of reading skills not only among Afan Oromo-speaking primary school students, but also students whose mother tongue was Amharic, Hararigna, Sidaamu Afoo, Somali and Tigrinya.

In the study, pedagogic and logistical difficulties were identified as factors for poor reading skills in Ethiopia’s six major regions. However, the order of alphabet was not cited as a factor for the dismal reality. In a post on the citizen journalism site OPride.com, one blogger agreed with the findings of the research but questioned the connection it had to the alphabet order, writing:

There is little disagreement on the core problem here: The education quality crisis in Ethiopia needs fixing. …. The disagreement here though is on the proposed solutions. This is underscored by a key question that everyone is asking: JUST HOW DOES REORDERING THE AFAAN OROMO ALPHABET IMPROVE READING AND LEARNING OUTCOMES?

‘Yet another fraud perpetrated on the Oromo people’

The change actually took effect in 2016 and school textbooks already reflect the reshuffling, but it was done so quietly. So much so that the news of the letter order change only made it into Ethiopia’s political news cycle after government affiliate Oromia Broadcasting Service reported about it. Over last two years, a series of political events with far-reaching repercussions such as protests and internet outages has dominated the country’s news cycle. 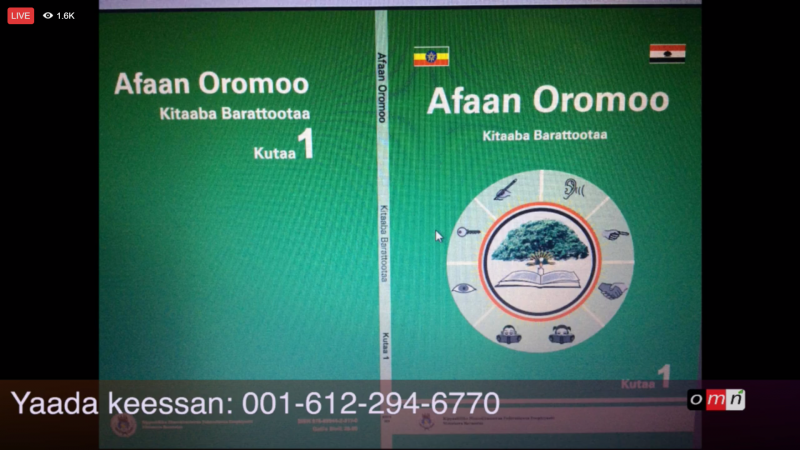 OMN special on the change of the Afan Oromo alphabet from June 5, 2017. Screenshot from programme shared by OMN TV’s official Facebook page channel.

As soon as the change was reported, concerned Oromo intellectuals started raising questions.

For them, this is the latest attempt in a series of steps intended to diminish the cultural rights of the Oromo people, who have historically been marginalized in Ethiopia. On Facebook Awol Kassim Allo, wrote:

The casual change/disfiguring of the Alphabet of a language spoken by more than 40 million people without any debate and discussion is appalling. The excuse given to justify it – improving the ability of children to read at early stages of instruction – is lame and cannot stuck up to scrutiny. …This is yet another fraud perpetrated on the Oromo people and it must be rejected.

The circumstance of the change also stoked another fear: that the decision to alter the order of the letters might be a plot by people who were disgruntled when the Oromos opted to adopt the Roman alphabet over the Ge’ez alphabet in 1991.

What’s up with this ‘new Qubee’ thing? Are they really planning to change this swift? A generation would relearn the newly introduced Qubee?

Prior to 1991, Afan Oromo was written in different alphabets. The first Oromo Bible was printed in Ge’ez letters in the 19th century. During the reign of emperor Haile Selassie (1930-1974), Afan Oromo was not a written language.

When Ethiopia’s military regime came to power in 1974, it decreed that all Ethiopian languages must be written exclusively in Ge’ez alphabet— a draconian policy intended to promote unity among Ethiopia’s diverse ethnic groups.

Proponents of the Ge’ez alphabet believe that Ge’ez signifies the rich liturgic and literary tradition of Ethiopia. For them, preserving Ge’ez in the age of the Roman alphabet’s domination is a sign of resistance to cultural globalization and a symbol of identity. Responding to Awol Kassim Allo’s post on Facebook, Abeba Teshale wrote:

Simple, structured, logical, Ethiopian, African, Amharic/Tigregna alphabet is there for any one interested to adopt. 26 vs 338 syllables! There is an alphabet for each sound and for the ones that don’t have one, we could crate a symbole. Just a thought

For many Oromos, though, adopting the Roman alphabet is a matter of selecting an alphabet that best fits the Afan Oromo sound system.

According to academic Teferi Degeneh Bijiga, who wrote his doctoral dissertation on the topic of Afan Oromo writing system, complex historical, cultural and linguistic forces were at play when Oromo intellectuals decided to adopt the Roman alphabet in 1991.

Over the next few weeks, this issue will be front and center in Ethiopian politics, where the Ethiopian government is operating under a state of emergency because of the protests that began over land use as well as political and economic marginalization in Oromia in November 2015

Dispelling the curse of the Nile -Khaled Diab