I cry for the hundreds of victims of the October 2, 2016 Irreecha Festival Massacres in Ethiopia.

I also cry out for freedom, democracy and human rights in Ethiopia.

On October 2, 2016,  troops loyal to the Tigrean Peoples’ Liberation Front (T-TPLF) opened fire indiscriminately on crowds attending one of the most important cultural and spiritual events in Ethiopia, the Irreecha (Thanksgiving) Festival  in the town of Bishoftu, some 45 miles southeast of the capital Addis Ababa.

An estimated 500 plus people were killed by gunfire and in a pandemonium that followed the gunfire. Twice that number were severely injured and maimed.

For over ten years, I have been the unremitting voice of massacre victims in Ethiopia.

For over ten years, I have appealed to the conscience of T-TPLF leaders, but having none, they have ignored my appeals.

The people of Ethiopia petitioned, solicited and implored T-TPLF leaders and their cronies and supporters to change their ways; to become more human and humane;  to show a little compassion and understanding;  to be a little less greedy and to feel the pain and suffering of their. They have turned a deaf ear to the voice of justice and blinded their eyes to  the suffering of the people. The have answered the peoples’ pleas with repeated insults, injuries and massacres.

I became a human rights advocate outraged by the Meles Massacres which resulted in the deaths and injuries of over one thousand unarmed protesters following the 2005 election.

As a utopian Ethiopian, I believed that  “The arc of the moral universe is long, but it bends towards justice.” For over a decade, every Monday, without missing a single week, I have raised my pen to register my bootless cries to the conscience of humanity and the mercy of divinity.

I believe freedom is like a train that is always delayed, but also always arrives.

On October 15, 2007 (almost to the week this month), I announced to Ethiopians, “Hold on! Hold fast! Hold tight! Your Freedom Train is coming!” (See my commentary, “One Small Step for the U.S. Congress, One Giant Leap for Ethiopian Human Rights”.)

I believe the Ethiopia’s Freedom Train has finally arrived, though very, very late.

For the first time, in over a decade, I must hold my peace this week.

This is the time for me to cry and cry again for the innocent young men, women and children who were slaughtered by the T-TPLF at the Irreecha Festival in Bishoftu on October 2, 2016.

I raised my pen to write, but my pen refused to shed its tears of ink. So I must cry and cry again.

I shall bite my tongue, just this once.

I yield my pages to Barack Obama to speak directly to the Irreecha Festival Massacre  victims, their families, friends and communities in  Ethiopia.

Let Barack Obama, the stalwart defender of the T-TPLF speak to them about democracy, the rule of law and human rights.

The blood of the Irreecha Massacre Victims are on Obama’s hands. There is no detergent on earth that can wash the blood of those victims from his hands. NONE!

Let Obama wag his silver forked tongue and ooze out his venomous lies.

I have nothing to say to him now.

But paraphrasing Shakespeare, I ask my readers only one question: “Were there a more malignant serpent seen, with forked tongue,/ That slily glided towards the majesty of Ethiopia?”

I don’t bite my tongue too much when it comes to these issues. We are opposed to any group that is promoting the violent overthrow of a government, including the government of Ethiopia, that has been democratically elected. We are very mindful of Ethiopia’s history – the hardships that this country has gone through. It has been relatively recently in which the constitution that was formed and the elections put forward a democratically elected government. U.S. President Barack Obama, Press conference in Addis Ababa 27 July 2015 (Emphasis added.)

Let history record: Ethiopians make no distinction between the killers who committed heinous crimes against humanity at the Irreecha Festival on October 2, 2016 and those who defend, bankroll, finance, subsidize, publicize, authorize, humanize, glamorize, militarize, idolize, lionize an apologize for them.

It is often said, “Those who do not learn from history are doomed to repeat it.”

The history of apartheid South Africa is repeating itself in Ethiopia every day.

On October 2, 2016, the T-TPLF apartheid regime in Ethiopia massacred over 500 men, women and children and injured hundreds more.

The Sharpeville Massacre is permanently recorded in the annals of man’s inhumanity to man in the Twentieth Century.

I do not doubt that the T-TPLF Irreecha Festival Massacre of October 2016 will be remembered as the second Sharpeville Massacre on the African continent in the in the Twenty-first century.

BEHOLD THE HARVEST OF APARTHEID IN WHITE AND BLACK! 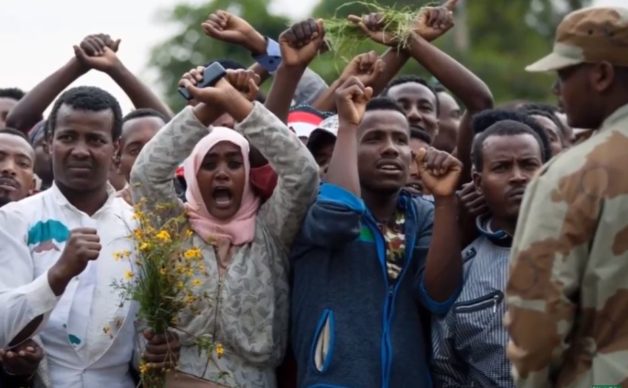 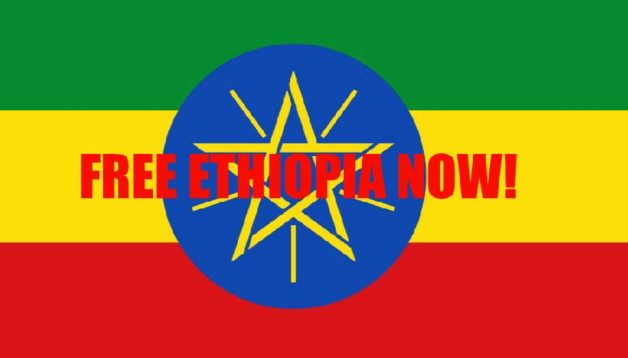 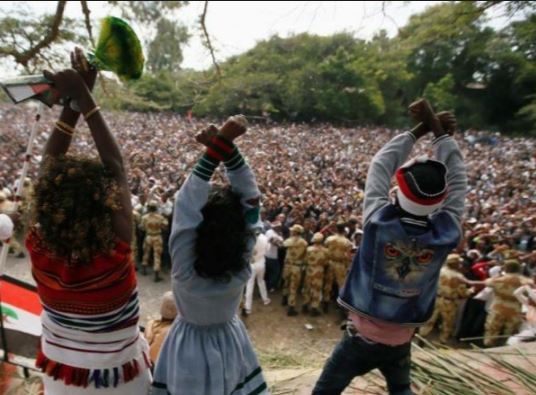 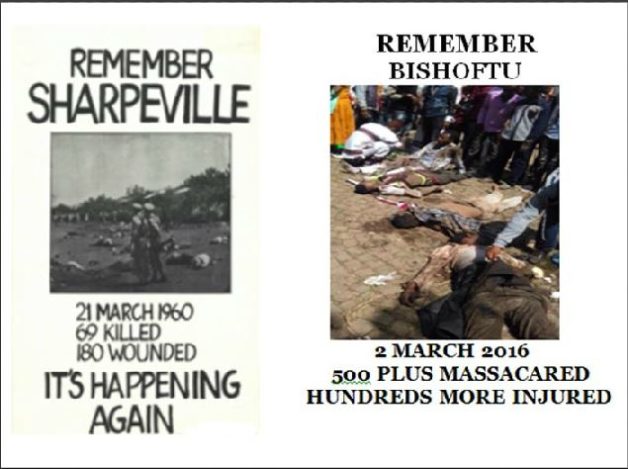 When all fails to organize the People, conditions will.  Marcus Garvey