AUSTIN, Texas, Feb 2 (Reuters) – The first known case of Zika virus transmission in the United States was reported in Texas on Tuesday by local health officials, who said it likely was contracted through sex and not a mosquito bite, a day after the World Health Organization declared an international public health emergency.

The virus, linked to severe birth defects in thousands of babies in Brazil, is spreading rapidly in the Americas, and WHO officials on Tuesday expressed concern that it could hit Africa and Asia as well. Zika had been thought to be spread by the bite of mosquitoes of the Aedes genus, so sexual contact as a mode of transmission would be a potentially alarming development.

Dallas County Health and Human Services said it received confirmation of the case in Dallas from the U.S. Centers for Disease Control and Prevention.

The county department said on Twitter that the person was infected through sexual contact with someone who had traveled to Venezuela. The person infected did not travel to the South American country, county health officials said.

The Texas Department of State Health Services was slightly more cautious in its assessment, saying in a statement, “Case details are being evaluated, but the possibility of sexual transmission from an infected person to a non-infected person is likely in this case.” 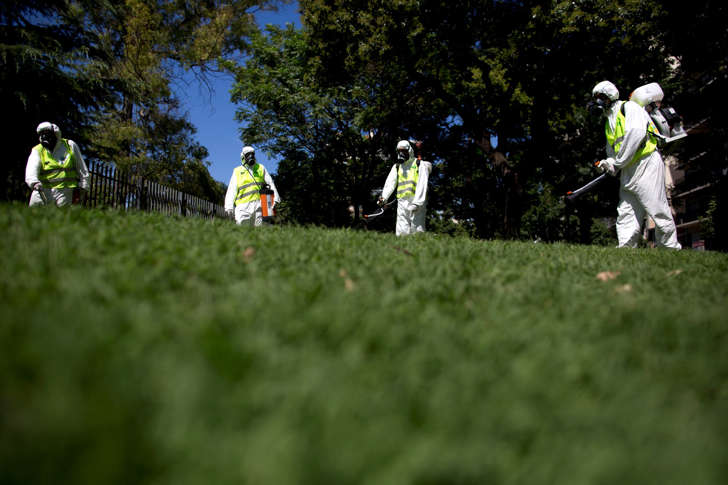 © Natacha Pisarenko/AP A fumigation brigade spray an area of Chacabuco Park in a Aedes mosquito control effort, in Buenos Aires, Argentina, Wednesday, Jan. 27, 2016. Zika virus is spread by the same Aedes mosquito as dengue fever and…

County authorities said there were no reports of the virus being transmitted by mosquitoes in the Texas county.

Previously, international health officials had noted one case of possible person-to-person sexual transmission. But the Pan American Health Organization said more evidence was needed to confirm sexual contact as a means of Zika transmission. The medical literature also has one case in which the virus was detected in semen.

The virus has been reported in more than 30 countries and linked to microcephaly, in which babies have abnormally small heads and improperly developed brains.

The American Red Cross on Tuesday asked blood donors who have traveled to Zika virus outbreak areas such as Mexico, the Caribbean, or Central or South America to wait at least 28 days before donating.

The WHO has said the virus could infect 4 million people in the Americas. It said on Tuesday it launched a global response unit to fight the mosquito-borne virus.

“Most important, we need to set up surveillance sites in low- and middle-income countries so that we can detect any change in the reporting patterns of microcephaly at an early stage,” Dr. Anthony Costello said in Geneva. Costello is WHO’s director for maternal, child and adolescent health.

Twenty to 30 sites could be established worldwide, mainly in poor countries without robust healthcare systems.

Brazil is the country hardest hit by Zika. In an address to a joint session of Brazil’s Congress, President Dilma Rousseff said her government will spare no resources in mobilizing to combat the mosquito that transmits the virus. With no vaccine or treatment for Zika, efforts to curb its spread have focused on eradicating mosquito breeding sites.

Brazil, which has more than 4,000 suspected cases of microcephaly that may be linked to Zika, is scheduled to host the Olympics in Rio de Janeiro in August.

Rousseff also said Brazil and the United States will enter a partnership to develop a Zika vaccine as soon as possible to stem the spread of the virus.

French drugmaker Sanofi SA on Tuesday announced that it has launched a project to develop a vaccine against the virus, the most decisive commitment yet by a major vaccine maker. The company said its Sanofi Pasteur vaccines division would use its expertise in developing vaccines for similar viruses such as yellow fever, Japanese encephalitis and dengue.

Other companies also joined the race on Tuesday to develop a vaccine. The University of South Australia said it was working on a Zika vaccine with Australian biotech Sementis Ltd.

Experts have said a Zika vaccine for widespread use is months if not years away.

Costello said the Aedes mosquitoes that carry the Zika virus “are present … through Africa, parts of southern Europe and many parts of Asia, particularly South Asia.” Africa and Asia have the world’s highest birth rates.

WHO Director-General Margaret Chan said on Monday it was “strongly suspected but not yet scientifically proven” that Zika causes microcephaly.

The first Irish cases of Zika virus have been detected in two people with a history of traveling to a country affected by the mosquito-borne infection, the Health Service Executive of Ireland said.

Chilean health officials said they have confirmed three cases in Chile of people infected with the Zika virus, all of whom were infected while traveling elsewhere in Latin America.

An Australian state health service said two Australians were diagnosed with the virus after returning from the Caribbean, confirming the first cases of the virus in the country this year.