A Canadian citizen who spent 11 years in an Ethiopian prison is calling on the government to learn from the failures in his case, and make sure it never happens again.

“I expected to die in there,” said Bashir Makhtal, who was convicted on terrorism-related charges in 2009 and given a life sentence. Amnesty International has described the charges against him as “blatantly unfair,” and called his ordeal “an 11-year saga of grave injustice.”

Makhtal was kept in solitary confinement, without access to the outside world, for two whole years. He described conditions as harsh, with often sub-zero temperatures, and not enough food, light or ventilation. For 24 hours a day, he said, he could hear other prisoners being interrogated.

At a press conference to be held later today, he will call on the Canadian government to learn from the mistakes made in trying to help him, and the additional suffering it caused. He will urge the government to carry out an independent review of those efforts.

“Someone has to take the responsibility of what happened to me,” he told Anna Maria Tremonti Tuesday on The Current in his first interview since he was released suddenly in April and returned to Toronto. 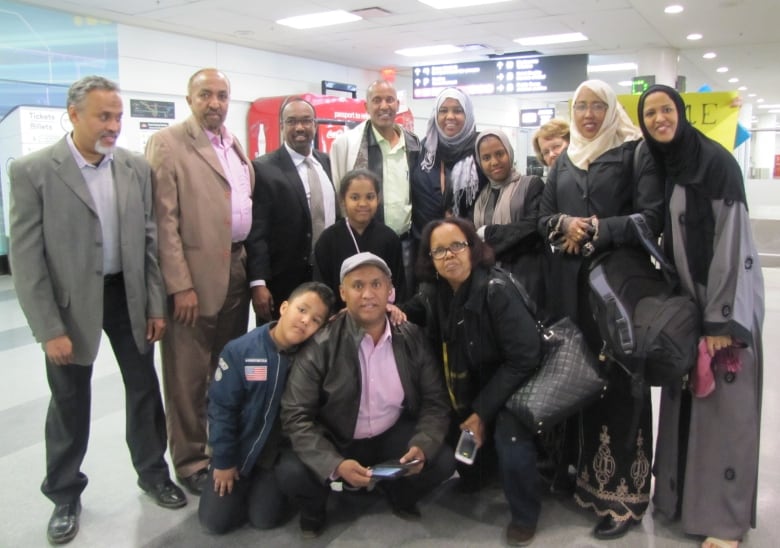 Makhtal’s family and friends greeted him on his return to Toronto in April. (Courtesy of Amnesty International)

‘I tried to resist’

Makhtal was born in Ethiopia of Somali descent, and became a Canadian citizen in 1994. He was working in Somalia in Dec. 2006 when Ethiopian troops invaded. While trying to cross into Kenya to find his wife, he was detained. He was removed to Nairobi, where he contacted the Canadian Embassy. Staff came to see him — their offices were one block from where he was being held — and told him they had raised the issue and were awaiting a reply.

Two weeks later, Kenyan officials told Makhtal he was being deported to Ethiopia.

While he was being taken to the airport, his wife tried to call the embassy, he said. But it was a Saturday — the offices were closed.

“I tried to resist when the Kenyans forced me to board the plane,” he told Tremonti. “I lay down on the runway, crying and saying; ‘I’m not Somali, I’m not Ethiopian, I’m not going anywhere.'”

Makhtal asked to be deported to Canada. Instead, he was beaten brutally, he said, and put on the flight to Ethiopia.

He was placed in solitary confinement, and not seen or heard from for the next two years.

Bashir Makhtal tried to enlist the help of the Canadian embassy before his deportation, he tells Anna Maria Tremonti. 1:54

“There’s a lot of questions that remain as to why the case wasn’t taken more seriously than it was at the time,” said Alex Neve, secretary general of Amnesty International Canada.

Makhtal had been interrogated by Ethiopian security officials while in Nairobi, Neve said, and had flagged this to Canadian officials.

“That’s not usual,” Neve told Tremonti, “that Ethiopian security officials suddenly show up in a Kenyan jail cell to talk to a Canadian detainee.

“But it doesn’t seem that that elevated the case. It didn’t seem to push it up to senior levels of ambassadors and ministers starting to look at it very seriously.”

Canadian Bashir Makhtal has been sentenced to life in prison in Ethiopia, convicted of belonging to a terrorist group. But his supporters in Canada say he’s innocent. 2:08

Once he was in Ethiopia, he “literally disappeared for those first two years,” Neve said.

“No one had access to him, including the Canadian government.

The Current contacted the Office of the Prime Minister but has not received a reply.

A number of Canadian officials have taken an interest in the case over the years, including former transport minister John Baird, who visited Makhtal in prison in 2010, and parliamentary secretary Omar Alghabra, who worked on the case in recent years. 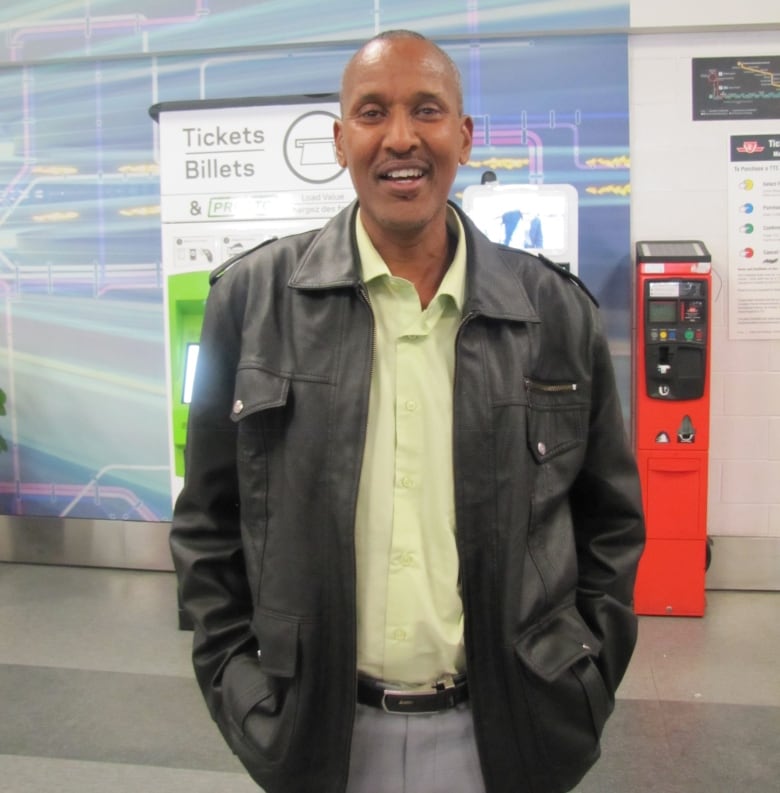 Bashir Makhtal on the day he returned to Canada. He wants the government to learn from his ordeal.(Courtesy of Amnesty International)

On April 18, a commander in the Ethiopian prison leaned in to Makhtal and whispered in his ear: “You are released.”

“I did not believe it,” Makhtal told Tremonti. He began to ask the commander questions but “he just congratulated me.”

“I was excited and shocked.”

Neve said that we can’t know for sure why Makhtal has been released now, but unrest in Ethiopia may have been a factor. The government there has been releasing “significant numbers” of political prisoners this year, he said, but Makhtal’s name was never on the list.

Bashir Makhtal was shocked and excited to be released and return to the country he loves, he tells Anna Maria Tremonti. 0:59

“The Canadian government was getting information that Ethiopia had no intention for him to be on any of those lists,” he said, “because in their view he was not a political prisoner but was a security prisoner.”

The Current contacted the Ethiopian embassy in Ottawa, who responded, in a statement, that they “would like to underscore that Mr Bashir Makhtal was arrested on terrorism charges and found guilty by the Federal High Court of the Federal Democratic Republic of Ethiopia for his unwarranted involvement in organizing terrorist activities inside Ethiopia.”

Makhtal denies that he was ever involved in terrorist activities, and said that the case against him was fabricated.

Makhtal’s grandfather was a founder of the Ogaden National Liberation Front (OLNF), a group of ethnic Somalis that live within Ethiopia, but want independence.

He thinks that family link is why he was kept in prison for so long, and possibly why he was detained in the first place.

Makhtal is grateful for the Canadian officials, human rights workers, and journalists who fought for his freedom. But he wants the Canadian government to “look back on what happened, and the shortcomings of the government’s side.”

“Somehow the government has to learn that lesson,” he said. “This should not happen again.”

A brief Facts of Oromo Protest

Ethiopia Should Return to Its Source

Ethiopia: A State Organized Rally Against Is Killing Ended in Chaos, Many Injured

Comment on Gadaa Melbaa’s book: “Oromia, an Introduction to the History of the Oromo People”