At least 500 people are believed to have been killed or seriously injured in Mogadishu, the capital of Somalia, in one of the most lethal terrorist acts anywhere in the world for many years.

The death toll from Saturday’s attack, which involved a truck packed with several hundred kilograms of military-grade and homemade explosives, stood at 239 on Sunday but is expected to rise as more bodies are dug from the rubble spread over an area hundreds of metres wide in the centre of the city. At least 300 people were injured, according to local reports.

Rescue workers on the ground said it would be difficult to establish a definitive death toll because the intense heat generated by the blast meant the remains of many people would never be found.

The devastating bombing will focus attention on the decade-long battle against al-Shabaab, an Islamist group, in Somalia. It provoked a chorus of international condemnation. Michael Keating, the UN special envoy to Somalia, called it “revolting”.

The US mission to Somalia said: “Such cowardly attacks reinvigorate the commitment of the United States to assist our Somali and African Union partners to combat the scourge of terrorism.”

Doctors struggled to treat the huge numbers of seriously wounded victims on Sunday, while thousands of people queued to give blood in Mogadishu.

Rescue workers were still digging out injured survivors late on Sunday night. Hundreds of people took the streets to protest against the attack.

The city has been hit by multiple bombings in recent years. None have been as deadly as this attack, however.

The bomb, which is thought to have targeted Somalia’s foreign ministry, was concealed in a truck and exploded near a hotel on a busy street, demolishing the building and several others.

Sources close to the Somali government said the truck had been stopped at a checkpoint and was about to be searched when the driver suddenly accelerated. It crashed through a barrier, then exploded. This ignited a fuel tanker which was stationary nearby, creating a massive fireball.

Ambulance sirens echoed across the city on Sunday afternoon as bewildered families wandered among the rubble and wrecked vehicles, looking for missing relatives. Bodies were carried from the scene in makeshift stretchers made of blankets, as people tried to dig through the debris with their bare hands.

“In our 10 year experience as the first responder in #Mogadishu, we haven’t seen anything like this,” the Aamin ambulance service tweeted.

“There’s nothing I can say. We have lost everything,” said Zainab Sharif, a mother of four who lost her husband in the attack. She sat outside a hospital where he was pronounced dead after hours of efforts by doctors to save him from an arterial injury.

Muna Haj, 36, said his son had been killed. “Today, I lost my son who was dear to me. The oppressors have taken his life away from him. I hate them. May Allah give patience to all families who lost their loved ones in that tragic blast … And I pray that one day Allah will bring his justice to the perpetrators of that evil act,” he said.

Alinur Abdi, a local businessman, said: “There is nothing resilient about this. How can you say ‘we are resilient’ when people are being killed in their hundreds? We need to get our act together and find a solution for this madness.”

The Somali president, Mohamed Abdullahi Mohamed, declared three days of national mourning and joined thousands of people who responded to a plea by hospitals to donate blood for the wounded. “I am appealing to all Somali people to come forward and donate,” he said.

Mohamed, who took power in February, had vowed to rid the country of al-Shabaab. He has faced huge challenges, with the insurgency proving resilient to a ramped-up offensive aided by the US, and a famine.

Dr Mohamed Yusuf, the director of the Mogadishu’s Medina hospital, said his staff had been “overwhelmed by both dead and wounded”.

He added: “This is really horrendous, unlike any other time in the past.”

Al-Shabaab, which has been affiliated to al-Qaida since 2011, has not yet claimed responsibility for the attack.

However the organisation has a history of launching bomb attacks against civilian targets in Mogadishu, and is known to avoid claiming responsibility for operations which it believes may significantly damage its public image among ordinary Somalis.

Somalian officials said al-Shabaab did not “care about the lives of Somali people, mothers, fathers and children”.

The prime minister, Hassan Ali Khaire, said: “They have targeted the most populated area in Mogadishu, killing only civilians.”

The information minister, Abdirahman Omar Osman, said the blast was the largest the city had seen. “It’s a sad day. This is how merciless and brutal they are, and we have to unite against them,” he said.

One western expert working with the Somali government said the bomb was aimed at the Ministry of Foreign Affairs and that it was likely al-Shabaab had not anticipated the destruction it would cause. 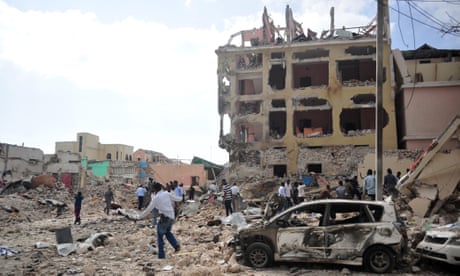 “That it exploded next to a fuel tanker was just very, very bad luck,” the expert said.

Investigators will seek to establish the source of the military-grade explosives used in the bomb. One source suggested they had been stolen from Amisom, the much-criticised African Union peacekeeping mission, which has about 20,000 troops in the country.

In recent months, Al-Shabaab has stepped up its attacks as it tries to destabilise the new government of Mohamed.

Though largely confined to the countryside since withdrawing from Mogadishu six years ago, al-Shabaab has repeatedly taken over small towns, as well as inflicting significant losses on Amisom and Somali troops.

The US military has stepped up drone strikes and other efforts this year against al-Shabaab, and a US special forces operative was killed in a skirmish with the group earlier this year, the first American combat casualty in Africa since the Black Hawk Down episode in Mogadishu in 1993.

There is a small faction of extremists linked to Islamic State in northern Somalia but it is not thought to have the capability to launch this kind of attack.

The British foreign secretary, Boris Johnson, said the UK “condemns in the strongest terms the cowardly attacks in Mogadishu, which have claimed so many innocent lives”.

Selassie Stand Up asking for official endorsement of the Ethiopian Government

PM writes to Ethiopia amid fears for death-row Brit

Anger over ‘violent crackdown’ at protest in Ethiopia

Ethiopia spends $1.8 million for lobbying only on one firm