Food insecurity in the Somali region of Ethiopia has worsened, putting 700,000 people on the verge of starvation, according to Oxfam International.

The humanitarian organization says that about 8.5 million people across the country face a high risk of hunger, a 30 percent increase since the beginning of the year.

Food shortages and hunger have led to displacement and negative coping mechanisms such as increases in child labor, early marriage and school dropouts, according to a recent joint report by the Ethiopian government and humanitarian partners. “Sex for food and child labor were reported in some woredas [districts],” the report said.

Much of Ethiopia is now in the midst of its lean season, and some people at risk have not received any food distributions since May.

“We’re not looking at a situation which will give respite until at least 2018 when you have a new harvest, and then maybe some food may come to the market,” Manish Kumar Agrawal, Oxfam’s humanitarian program manager in Ethiopia, told VOA in a phone interview. “Currently, we are going through the most difficult time, and, if the situation is not handled now, it can convert into a big catastrophe.”

The Famine Early Warning Systems Network, a U.S. government-funded monitoring body, said a lack of rainfall during the past year caused the food crisis. The group forecasts that, even if the October to December rainy season is plentiful, herders will continue to suffer because many animals have already died or stopped reproducing or giving milk. 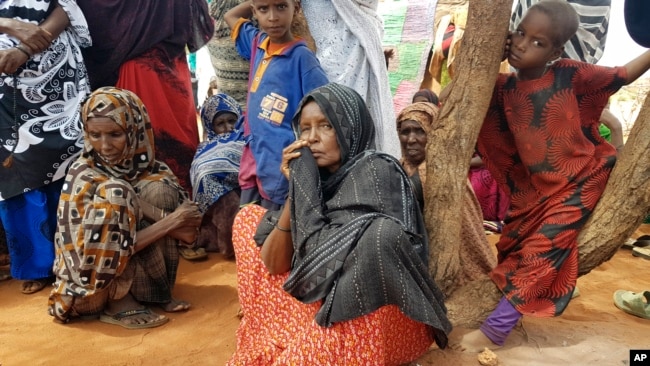 FILE – A mother of 12 (center), who was displaced from her village due to drought, sits among a group of women in the town of Werder, in Ethiopia’s Somali region, June 9, 2017.

More than $1B in aid needed

Agrawal said Ethiopia needs $1.25 billion in food, water and other life-saving assistance, but only 39 percent of requested funding has been met. He said Oxfam is prioritizing the most vulnerable people, including households with children under five, pregnant or breastfeeding women, and households headed by women.

“We are trying to do a very hardcore targeting, and we are going to go about those districts often and then trying to identify how best we can serve with our limited resources to the worst affected people,” said Agrawal.

Acute watery diarrhea continues to be a problem in the region, due in part to people being forced to drink water from unclean sources. About two months ago, Ethiopia had 32,000 cases, Agrawal said, nearly all in the Somali region.

“It’s gone down in the last couple of months, but the risk is still there. And there are really cases that are popping up every day in there, and the current situation, again, more than 10 million people don’t have a sustainable water supply system, and they are really facing acute water shortages,” he said.

The worst affected zones in Ethiopia’s Somali region are Dollo, Korahe, Afder and Jarar. Although the southern Somali region is the hardest hit, the southern Oromia region and the Southern Nations, Nationalities, and Peoples’ Region are also experiencing high levels of food insecurity.

Building Baby Dams to Save the Mother Dam: Ethiopia’s Option

TPLF:  Time to Reflect and Change- You will be reaping what you Sow