Reforms have opened up highly censored media landscape, but gov’t is accused of rolling back some of those freedoms.

Addis Ababa, Ethiopia – In awarding the Nobel Peace Prize to Ethiopia’s Prime Minister Abiy Ahmed, the Nobel committee earlier this month praised his “discontinuing media censorship” among a series of achievements during his first 100 days in power in 2018.

These included the lifting of the country’s state of emergency, the release of thousands of political prisoners, the legalisation of outlawed opposition groups, the tackling of corruption and the promotion of women in politics.

The freeing of detained journalists and bloggers, along with an end to the blocking of more than 260 websites and the restoration of access to media outlets forced to work in exile, resulted in Ethiopia jumping 40 places in the 2019 World Press Freedom Index compiled by Reporters Without Borders – from 150 out of 180 countries to 110, the largest leap by any country.

But the outbreak in Ethiopia of violent protests last week – more than 60 are estimated killed in clashes across the Oromia region, and in the cities of Dire Dawa and Harar in eastern Ethiopia – is fuelling ongoing questions about whether such new media freedoms are being abused to stoke ethnic tensions.

At the same time, the government is facing increasing criticism for repressing media and repeating the authoritarian ways of previous Ethiopian governments, including the ongoing implementation of a controversial Anti-Terrorism Proclamation to stifle dissent and gag journalists, including by imprisoning them.

According to an April statement by the Committee to Protect Journalists, the challenges that remain for Ethiopian media include the risk of attack and arrest, especially in restive regions; attracting advertisers in a market where businesses are wary of being seen to support critical publications; accusations of sowing divisiveness; and the proposed new media and anti-hate laws that could curtail media’s newly found freedoms.

Shortly before last week’s protests broke out, Jawar Mohammed, a highly influential – and controversial -activist who also runs the Oromia Media Network, posted on social media that his house in Addis Ababa had been surrounded by police officers.

Jawar alleged that police tried to remove his security guards assigned by the government following his return from the United States after Abiy lifted previous bans on opposition groups. In response, hundreds of young Oromo men soon gathered around Jawar’s house proclaiming allegiance to him, followed by further demonstrations spreading in other parts of Ethiopia.

The ensuing violence has seen Jawar heavily criticised and accused of inciting conflict, while his supporters argue he played no direct role in demonstrations that were a spontaneous response to a government campaign endangering his life. Police officials said no measure had been taken against Jawar either by the government or the police.

“The problem now is that so many individuals are mixing up the roles of activist and media when they shouldn’t go together – media is meant to have its own ethics and rules,” Abel Wabella, managing editor of the Addis Ababa-based newspaper Addis Zebye, said during an October 19 media forum in the capital to discuss the challenges faced by the media, and its role, in the country.

“You have people running media who are calling for protests – it’s totally absurd.”

Addressing this issue in Parliament the day before the incident at Jawar’s house, Abiy discussed media “fomenting unrest”, focusing on the role of Ethiopian diaspora figures.

“Using their second nationality and foreign passports as an advantage, these media owners are likely to run away to their safe havens after inciting conflicts and leading the country into chaos,” Abiy said.

The day before the prime minister’s parliamentary address, the head of the Ethiopian Broadcasting Authority, Getachew Dinku, suggested the authorities would consider shutting down local media institutions that incite violence by disseminating unethical and biased content.

“This is a fragile society, the Western liberal style of free media is not possible here yet,” said Kiya Tsegaye, an Addis Ababa-based lawyer. “Most people talk about their right to speech, but not about the responsibility of the media. This is a very transitional time, so the government should intervene when you have press who are abusing and taking advantage of the situation.”

Kiya added that a media code of conduct focusing on “core obligations” is sorely needed in Ethiopia to make media organisations more accountable.

Billene Seyoum, a spokesperson for the prime minister’s office, said, “a media law is in the pipeline”, adding that “the Ethiopian Broadcast Authority is in the process of reorienting its institutional form” to improve regulation.

“The appointment of experienced professionals to such institutions is a commitment by the government to undo the repressive tendencies of such institutions in their prior form – before the reforms. The anti-hate speech law is also a critical component of measures to hold accountable individuals and entities that are negatively taking advantage of the opening up of the media space and freedom of speech.”

‘Out of step with reforms’

But rights groups say the government must take measures to address the challenges still faced by journalists and avoid rolling back the progress made over the past year.

“The use of Ethiopia’s Anti-Terrorism Proclamation to arbitrarily arrest journalists is completely out of step with reforms witnessed in the country,” said Seif Magango, Amnesty International’s deputy director for East Africa, the Horn and the Great Lakes, calling for the law to be revised to align with international standards and no longer be used to harass journalists.

“This country has had 40 years of arbitrary killings, harassment and imprisonment of journalists,” said journalist Berihun Adane. “There’s no killings at the moment, but the rest is happening, especially with the Anti-Terrorism Proclamation being used against journalists, even though Abiy publicly said it needed to be stopped.”

Berihun was recently released from three months in prison due to charges of inciting “terrorism” through his journalism. As the case against him remains open, he said he is wary of what he writes and avoids Twitter – lest his posts be used against him in the case that has yet to be decided – focusing instead on mentoring journalists at the fledgeling one-year-old Berera newspaper based in Addis Ababa. 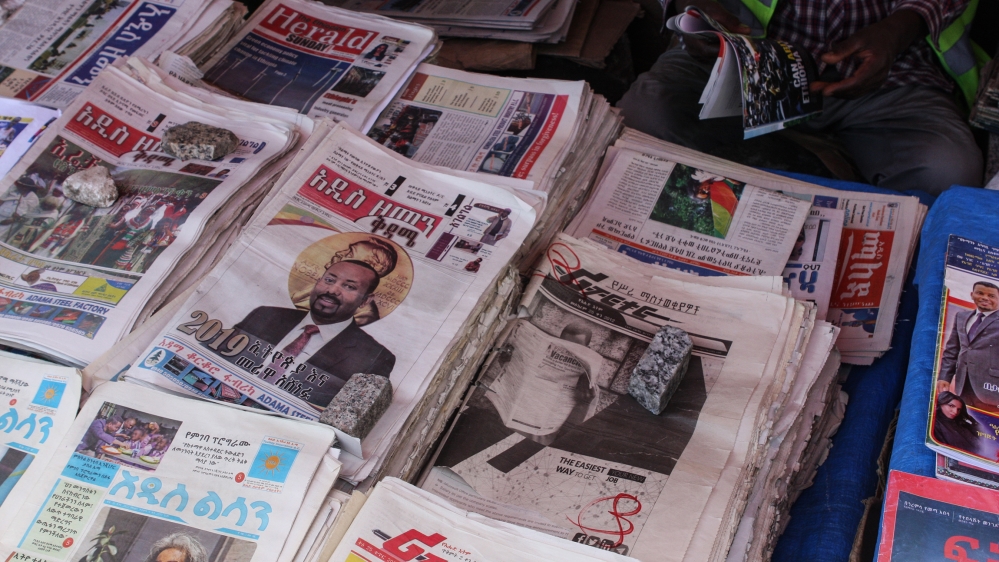 Some Ethiopian journalists said the media’s experience since Abiy came to power is repeating a trend that has occurred after every regime change since the fall of Haile Selassie in 1974: initially, new media flourish with the lifting of restrictions, but within a few years the new government is back to cracking down and attempting to put the lid back on what it opened.

“We double as activists and journalists as a necessity,” said Eskinder Nega, a prominent Ethiopian journalist and blogger who was released from prison under Abiy’s reforms in early 2018, and who recently tried to organise a protest rally in Addis Ababa that had to be called off. Eskinder and the organisers claimed the local authorities suddenly changed their minds, having previously permitted the rally to go ahead, as they did not want an anti-government rally so soon after the awarding of the Nobel prize.

But many Ethiopian media workers disagree with such a dual role, while opinions also vary widely as to how Ethiopia’s developing media landscape should be regulated, and what the country can tolerate.

After decades of suppression, Ethiopian media remains institutionally weak, Berihun said. The result is that many Ethiopians rely on social media and foreign-based media for news, increasing the chances of misinformation and manipulation permeating the news cycle.

“Ethiopia could disintegrate,” says Befekadu Haile, a political blogger who was arrested in 2014 as a member of the Zone 9 blogging collective that faced terrorism charges for their writing.

“It is no different to other countries – it is a political entity made by people, so if it was made by people, it can be destroyed by people. Ethnic nationalists are more powerful now than they have ever been.”

We Shall never Feed or Trade on Dead Souls!

The attack and subsequent suicide in 2012 of Alem Dechasa-Desisa, an Ethiopian migrant domestic worker in Lebanon, was a turning point