(Addis Voice) The Foreign Minister of Ethiopia has been caught in an explosive web of lies with a schoolgirl as the Government of Australia and the Rotary Foundation have denied giving 20 million Australian dollars to a 14-year old teenager, whom the nation’s “top diplomat” publicly praised and endorsed as an “exemplary philanthropist” and claimed her to be the winner of an unnamed “international prize”.

The Ethiopian-Australian girl, Beritu Jaleta Ahmed, claimed last week in a joint press conference with Dr. Tedros Adhanom in his own office that she was ready to build a school in Ethiopia with the 20 million Australian dollars that she won in a student competition held at her school in Melbourne. According to her, the prize money was jointly funded by the Australian Government and the Rotary Club of Australia [sic].

But Baden Powell College’s leadership, who knew nothing about the the competition or the prize, have already referred the matter to Victoria Police for investigation, Addis Voice has learnt. The public school that takes students from prep to 9th grade is dominated by students from immigrant families. It has around 1800 students, 180 staff and 50 volunteers. It gets an annual budget of around 12 million Australian dollars from the coffers of the Victoria Department of Education.

Tedros Adhanom publicly praised the teenager as a unique “role model” among the Ethiopian Diaspora for allocating such a large amount of money for development at such a young age. He commended her philanthropy and pledged that the government of Ethiopia would provide all the necessary support for the completion of the “modern school” project from nursery to secondary school levels that she planned build in Gara Muleta, Eastern Harargie, the birthplace of her father.

The Government of Australia and the Rotary Foundation have distanced themselves from the scheme and told Addis Voice that they have never heard of such a grand prize or the teenage winner of a multi-million dollars school competition. Some members of the Ethiopian community in Melbourne have blamed the girl’s father and the government in getting involved in such a shameful scam that can adversely affect the image of the country.

The Foreign Minister had also maximized the PR “opportunity” by spreading and spinning the news, along with pictures of himself, the girl and her father, Jaleta Ahmed, on Facebook and Twitter. “Beritu Jaleta has done an extraordinary deed that we should all learn from,” he wrote on his Facebook page. Under Australian law any person under the age of eighteen is considered a child.

“I came here to Ethiopia to build a school in Gara Muleta, Harargie. I won a competition of 20 million Australian dollars. So I came here with the Embassy of the government of Ethiopia in Australia to begin my project and the construction and also see the area and the land,” she told journalists, who were not allowed to raise any serious questions during the press the stage managed conference held in the office of the Minister.

Tewolde Mulugeta, a spokesperson of the Ministry of Foreign Affairs, added a spin to the propaganda claiming that she received the award last year for her extraordinary academic performance and proposal to build a school. “She used to participate in various school clubs. One of the clubs was the one she headed in areas of human affairs. While she was working in that club, they were exchanging views regarding the support of people for others,” Tewolde said unconvincingly. “The main thing was that she proposed an idea to create opportunities for others to get education. We have learned that people who have heard the idea arranged the prize for her. This happened nearly one year ago, around 2014,” he claimed nervously without providing any proofs and verification. 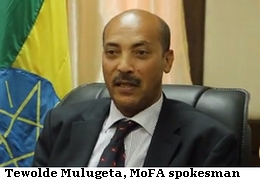 Bruce Allen, Manager of Rotary International in Australia, pointed out that 1300 Rotary Clubs raised only $A 5.6 million dollars for its own humanitarian projects and activities last year let alone giving “an outrageous amount of money” to a 14-year old school girl. “It is totally out of question. There was no application or grant to this person,” he said.

“She is saying that half the money came from the Rotary Club and half of it from the Government Australia. There is no way that any Rotary Club in Australia could afford to pay that amount of money. We just don’t have the money. She got 20 million Australian dollars and I find it highly unlikely. That is an outrageous amount of money,” Mr. Allen noted. He also said that there is nothing called “Rotary Club of Australia” as the girl said because there are 1300 Rotary clubs in the country. 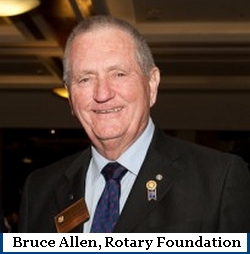 So many puzzled Ethiopians took to social media to vent their anger and express their doubts on how the person in charge of Ethiopia’s foreign relations is unaware of unlikely global developments as well as the legal implications of corrupting the morals and psychology of a child by involving her in such an orchestrated web of lies and deceptions never heard of in the history of schools anywhere in the world without making any effort to verify such claims.

by 37 percent in a bid to reduce the cost of the national expenditure. From $A 225 million the previous year, the Government of Australia cut its aid to Africa to just 133 million AUD.What makes the story even more ludicrous and bizarre is the fact that during the 2013/14 budget year Australia cut its foreign aid to Sub-Saharan Africa

During the same budget year, Rotary Foundation gave grants totalling $14.2 million to support 265 projects worldwide in the areas of disease prevention and treatment that he foundation dispersed totalling only $6.5 for education and literacy to support 66 projects around the world, according to its annual report.

Meanwhile, the Baden Powell College administration declined to give any official statement. But a school source, who spoke on condition anonymity, told Addis Voice that the school officials are very upset and disappointed to be dragged into this kind of scandalous scam.

“Because the issue involves a minor and is also under investigation by the police, we are not authorized to make any public comments,” the source said. The motto of the school is “Looking Forward, and Staying Ahead.” It is not now clear if Mr. Jaleta Ahmed and his daughter are looking forward to returning to Australia to face the music or would rather stay in Ethiopia despite being caught in dangerous web of lies and scandals.

To Ezekiel Gabissa: A Self-appointed leader of a land of Dystopia

The Upcoming National Election in Ethiopian should be Postponed