BERLIN — The Norwegian Nobel Committee on Friday bestowed the Nobel Peace Prize on an alliance of four Tunisian civil society groups for their tireless efforts to foster democracy in the nation that gave birth to the Arab Spring.

The quartet of groups, including a worker’s union with more than 1 million members, has worked to advance democracy in Tunisia, which still struggles with unrest but has made relative strides in reforms as other Arab Spring nations face greater violence, instability and the re-emergence of dictatorships.

The groups, the committee said, made a “decisive contribution to the building of a pluralistic democracy in Tunisia in the wake of the Jasmine Revolution of 2011.”

“More than anything, the prize is intended as encouragement for the Tunisian people who have laid the groundwork for a national fraternity which the committee hopes will be followed by other countries,” the committee said. 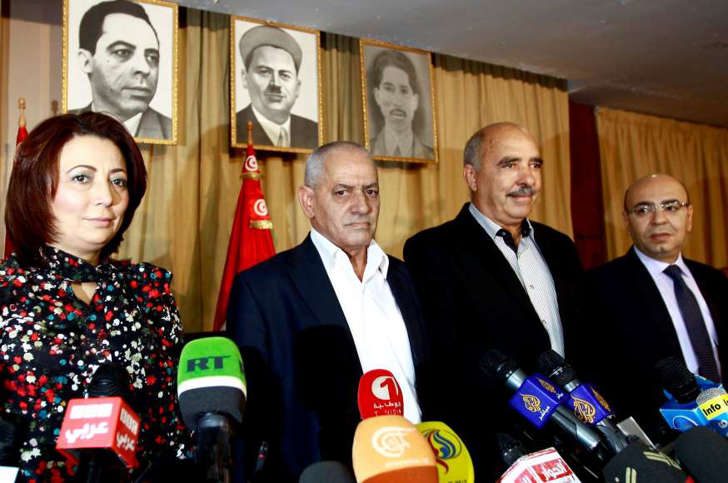 © Anis MiliThe National Dialogue Quartet comprises four key organizations in Tunisian civil society, including the Tunisian General Labor Union, the Tunisian Confederation of Industry, Trade and Handicrafts, the Tunisian Human Rights League and the Tunisian Order of Lawyers. But the award also seemed to more broadly honor a nation where the Arab Spring began after street vendor Mohamed Bouazizi set himself on fire on Dec. 17, 2010 to protest his helplessness after his wares were confiscated by local authorities.

[Why the Nobel peace prize was awarded to the Tunisian National Dialogue Quartet, in one map]

Houcine Abassi, secretary general of the labor union, told The Associated Press, the group was “overwhelmed” by the Nobel selection.

“It’s a prize that crowns more than two years of efforts deployed by the quartet when the country was in danger on all fronts,” he said.

“I am happy,” he said, adding that the quartet members weren’t expecting the prize.

The groups, he noted, joined together to try to “bring the country out of crisis.”

Ali Zeddini, vice president of the Tunisian Human Rights League, acknowledged that the Nobel decision comes “at a time of great stress and tension in Tunisia.”

“But it has reminded us of our accomplishments, and places great responsibility on us to maintain peace and our democracy through dialogue,” he told The Washington Post.

Today, Tunisia political transition that remains far from complete and tenuous. But the progress made thus far came about because of the ability of civil society group’s to reach a “landmark compromise” between the government and opposition groups, according to Mohamed Kerrou, a nonresident scholar at the Carnegie Middle East Center.

“Tunisia’s consensus was only possible thanks to an inclusive national dialogue brokered by the Quartet,” Kerrou wrote.

In 2013, the influential labor union sought a national dialogue, uniting with other groups to force the fledging Tunisian government into negotiations and compromise with opposing forces as the nation was spiraling into both economic and political crises.

Following the fall of President Zine el-Abidine Ben Ali in 2011, Tunisia’s democracy emerged as the strongest in the Arab world even as it confronts still deep divisions and challenges.

After a dialogue between Islamist and secularist lawmakers, Tunisia last year passed a constitution seen as one of the most liberal in the Arab world and winning praise from human rights groups. Last year, Tunisia also held its first democratic presidential elections, voting in President Beji Caid Essebsi, an 88-year-old who formerly served under the repressive regime of Habib Bourguiba.

Yet the nation has since struggled to find a lasting peace, and fears have reemerged about the threat to democracy following a crackdown against rising Islamic extremism. After a Tunisian gunman believed to have received training from Islamists in Libya slew 38 people at the beach resort of Sousse last June, the government vowed to shut down extremist mosques and take other steps to curb terror.

Erin Cunningham and Heba Habib in Cairo contributed to this report.

Memorandum No. 3: Ask Not What Abiy Ahmed Can Do for Ethiopia, Ask What You Can Do for Your Ethiopia!

Tirunesh Dibaba: I Love Running Because …